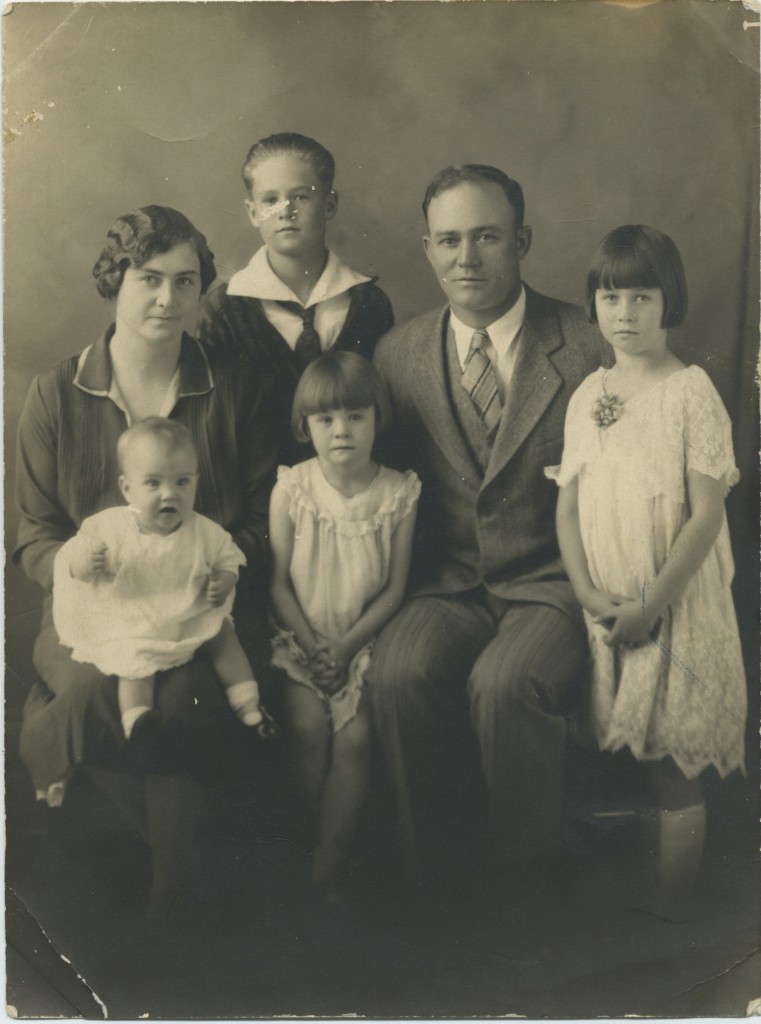 The Hamilton Family, circa 1930
Photographer: Unknown 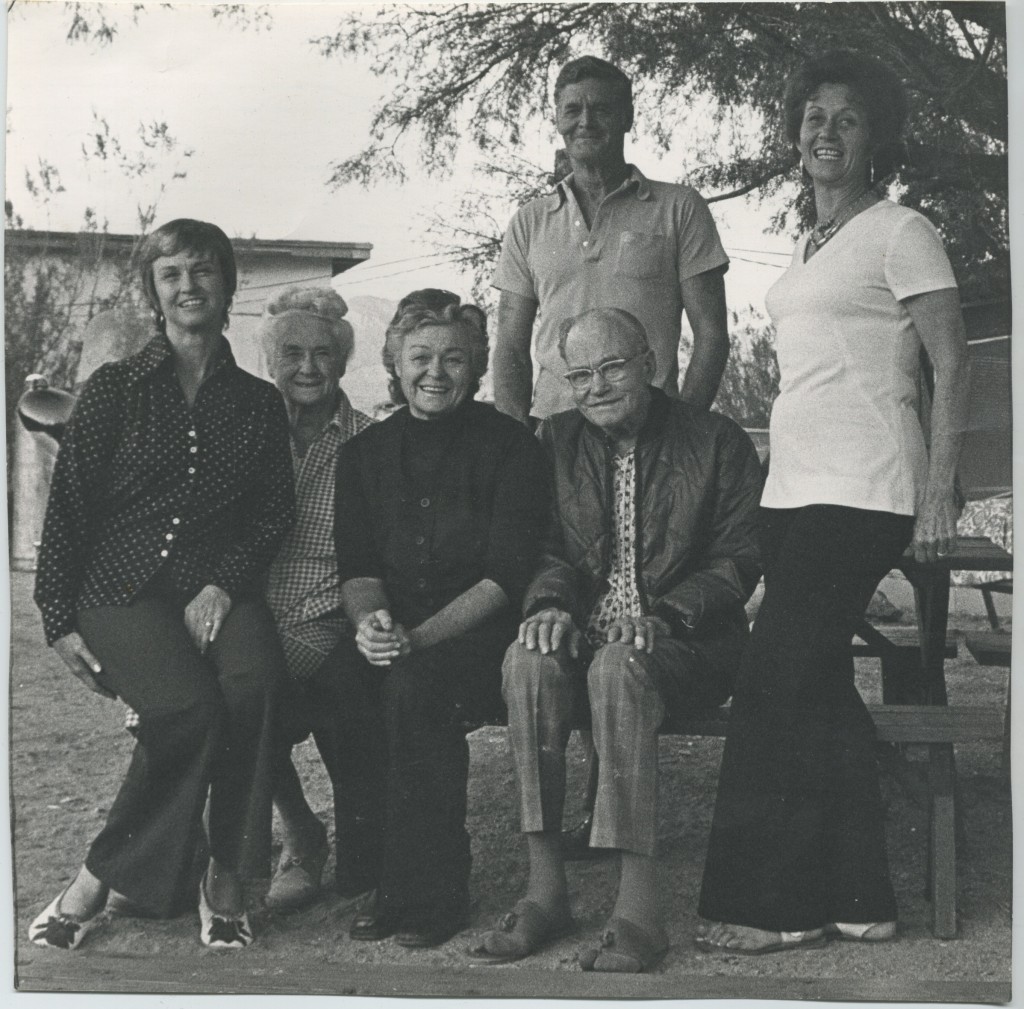 The Hamilton Family, circa 1975
Photo by Judi Rowley

Teepees lined up in a circle fire pit in the center. Black smoke on the inside of the teepee. Smells of dinner coming from the big cast iron pots. The food was BBQ chicken, stew, beans, bread—cowboy food. Nothing that special, but it was the setting that made it great. The Grand Tetons were beautiful in the distance, looking like the Himalayas. Chuck Wagon at Moose, Wyoming (After)

“Eureka! I’ve found it!” shouted my nerdy cousin, as he saw the first teepee several miles from our destination. He never missed an opportunity to practice his vocabulary.

As we piled out of the green Country Squire station wagon, the rich and familiar smells of cowboy food made us happy to have arrived at the circle of teepees.

Each teepee, as tall as the peak of a two-story house, had a fire pit in the center. The supporting beams were as big around as one-pound coffee cans. They reached much taller than the white canvas tent, and stuck out the top at varying angles and lengths. Most of these teepees had picnic tables inside, hewn from rough lumber, where us children would always choose to eat our dinner. (How often does one get to eat a meal in a life-size teepee?)

The other teepees were for cooking the food. The food and family tradition were why we made this annual stop on the road connecting the national park jewels of Yellowstone and the Grand Tetons. Inside the main grub teepee, the big black cast iron cooking pots were so large I could have crawled inside an empty one. Tonight, however, they were filled with warm and hearty food—BBQ chicken, meaty short ribs, thick stew, pungent baked beans, and soft, buttery bread.

When the weather was agreeable, as it often was late in summer in northwest Wyoming, the adults ate outside where additional picnic tables lined the freshly mown ridge. The backdrop for this breathtaking dining room was the Grand Teton range, the Himalaya-like mountains that rose out of the plateau in the near horizon.

After everyone had their fill in this all-you-can-eat (and we did) chuck wagon smorgasbord, groans and sighs of fullness and contentment filled the station wagon. We wedged ourselves back in and continued on the road to our next destination.

Note: I haven’t thought of this place in decades, until I saw today’s prompt from Kate (below and here). When I searched for the teepee chuck wagon in Wyoming, I learned that they are still doing their thing in Moose, Wyoming.

Write for two minutes to describe a very specific place.  If you’re just free-writing, it can be a place that you love, or have visited, or a place that frightens you…

Anyplace is fine. If you want to relate this to your work-in-progress, choose a very specific setting within the piece and imagine yourself there.

When your two minutes are up, stop writing.

Now…if your place is real and you can go there, go there now.  I’ll wait….

If it’s far away, find a picture of it. If it’s not a real place, put yourself there in your mind. Now write for one minute about each of the following:

Now, go back and rewrite that descriptive paragraph. Include your best tiny, surprising details, and work on senses other than sight. Better?  More vivid?  This is a fun activity to do with kids, too. Have them write about the playground or gym or cafeteria; then go there and hunt for sensory details!

It had been a slow day fishing and we hadn’t caught a thing. My husband and I were heading back to the car when we heard an excited shout: “Hey, come back!” We turned to see a shaggy-haired man with a red beard, whom we had visited with that day, motioning at us to come back to the pier.

We hurried back and he was holding out his fishing pole for me to take. “I saw this fella jump up and he’s an old one. He wouldn’t be good for eatin’. I don’t want him. You want to try to land him?”

“I sure would! Thanks!” I said, as I grabbed the pole. Although I had only met this man that morning, after three hours of fishing near him he had come to learn that I’d always wanted to catch a big fish. (Up until this day, my greatest fishing experience had been catching a two-pound carp from the bottom of Lake Mojave when I was 12 years old.)

I followed all the advice my fishermen comrades eagerly gave me. “Reel in as you move the pole down to the water, then pull back,” my husband said. “Let him run with it for a while. You can tire him out that way,” said Red Beard. I reeled in and pulled back and let that big ol’ fish run as much as he wanted. A half hour of all that and he was getting closer to the pier. I saw him jump out of the water several times. Someone said it was a Chinook salmon. Unlike my fishing mentor with the red beard, I couldn’t tell anything about this fish’s age, but I could tell he was big-he was as long as a bathtub and as big around as a football! And I was catching him!

After nearly forty minutes of fighting, my arms were getting tired and I was hoping Monstro was also getting tired. He was very near the pier now, because all the fishermen were becoming electrified. One angler held a big fish net, ready to scoop him up when I got him close enough. My husband was getting the camera ready. Others were standing around cheering me on.

As he got within a pole’s length from us, we all thought I had him, but abruptly I noticed everything got quiet in the water around the pole. I tugged on the pole and it took just seconds for me to realize my prize had escaped. Red Beard explained what happened. It seems there was a big power cable in the water running between the pilings on the pier and Moby must have swam over and around that cable to snap the line. He got away with the hook still in him.

I was very disappointed, of course. There went my hope of catching a big fish. But now, twenty years later, I enjoy thinking about how that old fella outsmarted all of us. What’s even better than a salmon dinner, is to be able to talk about the big one that got away.